It is important for executives to understand that emotions allow them to put things in context and have a larger view of what is happening. It also helps build valuable connections with their colleagues and teams.

We know from research that emotional intelligence is a key competency in effective leadership. Leaders with low IQs generally run the risk of becoming isolated. You may have witnessed this in your workplace, or even in yourself: the leader who is highly competent in the skills the job requires but takes on everything themselves, struggling to rely on the teams around them. This may be due to a gap between executives recognizing emotions at work, but not seeing the importance of working with those emotions.

For today’s brain circuit, consider the emotions that occur in your workday. Make a list of the emotions you have witnessed at work during the last week. If you struggle naming the exact emotion, explore if it’s a pleasant or unpleasant emotion and how much energy you felt.

Now, for each of the emotions reflect on how they matter in your current leadership context and why you believe that.

What did you discover?

Which emotions have you addressed and actively included in your thought process?

Which emotions occur frequently and are not actively addressed? Why do you consider some emotions less important than others? Is it easier to work with pleasant than unpleasant emotions? If so, why?

As a next step, make a list of emotions that you have considered in your decision-making process.

For what percentage of time do you include emotions in your decision-making?

Then take some time and really think about why you have answered the way you have so far. What is holding you back from increasing the percentage of time you include emotions in your decision making? How would including these emotions in your thought and decision-making process make you more effective?

Based on your answers to these questions, I would encourage you to define one concrete action to work more effectively with your emotions.

As a suggestion, you may want to keep an emotional journal and start noticing very consciously how you and others feel. You could write down two to three times per day how you feel and why, for about 21 days, and what you have learned. Doing it for 21 days might allow you to transform this into a meaningful leadership habit.

If you are struggling with this, you are not alone. During my research I asked 160 executives how often they included emotions in their decision-making process and only seven percent said they do it all the time. Roughly 70 percent were below average on this.

It is important for executives to understand that emotions allow them to put things in context and have a larger view of what is happening. It also helps build valuable connections with their colleagues and teams. Today’s leader needs to be a secure base, and a critical part of that is embracing the emotions that occur during a day and letting your teams see that emotions are a welcome part of the working day.

Leaders generally express fear about the vulnerability being seen as “emotional” at work may cause. But it is exactly this vulnerability that allows leaders to be strong, and their teams to build trust with them.

For more information on EQ and how to build it, check out this book talk I had with Philip Holder, author of Discover Your Emotional Intelligence. 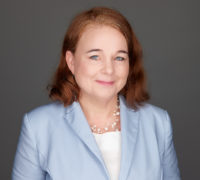 She works as a leadership lecturer and senior executive coach. She holds a doctorate in business administration and a master’s degree in Cognitive Psychology. Silke is licensed to administer and interpret several instruments to illuminate individual and group preferences and growth potential. Her coaching and teaching activities cover work with teams and individuals from international organizations.

An exercise for leaders as they move up

As we move up in organizations, one of the hardest lessons for leaders can be knowing when to defer to the team versus go it alone....